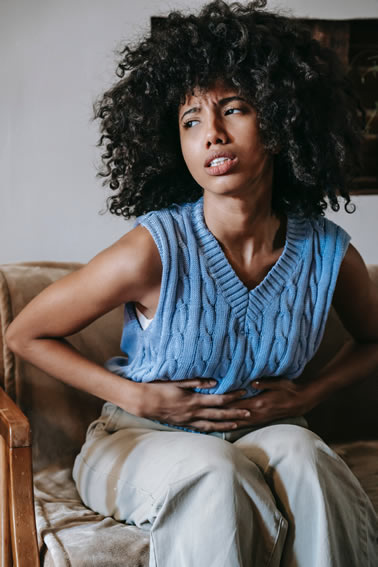 Abdominal pain “Tummy ache” is a common symptom seen by GPs, and is often associated with other symptoms form the bowel including nausea, heartburn, bloating, diarrhoea or constipation, or weight loss.

Abdominal pain can have many causes, some of which are bowel related, but others lie outside the bowel such as gallstones, kidney problems or gynaecological issues. Therefore when we investigate abdominal pain it is important to think of conditions both within the bowel and outside. Because of this, patients with abdominal pain often have endoscopy or colonoscopy tests to look for conditions within the bowel and scans (Ultrasound, CT or MRI scans) to look for conditions outside the bowel. These tests are complementary in reaching a swift and correct diagnosis.

Abdominal pain can be caused by irritable bowel syndrome (IBS), which although not dangerous can be very debilitating and affect work and social life. If investigations rule out other more serious conditions, irritable bowel syndrome can be effectively treated by a combination of dietary, medical and psychological therapies with improvement in quality of life; however abdominal pain can indicate more serious disease including bowel inflammation (Crohn’s disease), stomach ulcers, or even cancer. Therefore if pains are persistent, progressive or severe prompt investigation is needed.

Given the wide variety of causes of abdominal pains, it is critical to get the correct diagnosis to ensure effective treatment. Gallstones and stomach ulcers present with very similar pains at the top of the abdomen, and patients often need an ultrasound and an endoscopy to determine the cause of the problem. Both can be effectively treated, gallstones with keyhole surgery to remove the gallbladder, versus stomach ulcers which are healed with acid supressing medicines, but comprehensive testing is needed to make sure the correct treatment strategy is selected.

Mrs. Jane Smith (not her real name) had started to get pain the tummy after eating for about 6 months. The pain would last a few hours and sometimes she would feel it in her back as well. As time went on the pain got worse and she lost some weight as she was frightened to eat. This made going out socially with friends very difficult. Her GP gave her a trial of an acid suppressing tablet (omeprazole) for a month but this didn’t really help, and so she was referred privately to me.

Jane came for a discussion about her pain which was happening almost every day and was worse after fatty foods. It was seriously impacting her social life and she was finding she was tired and cranky at home, just getting worn out by the pain. She was very keen to get an answer as quickly as possible.

We therefore agreed to do both an endoscopy to look inside the bowel for inflammation or an ulcer and an ultrasound scan to look outside the bowel at the gallbladder, bile ducts and pancreas. We talked about the endoscopy which is quick, only taking ten minutes, and safe. Jane decided she would like sedation to be very relaxed and sleepy for the test to be as comfortable as possible.

The endoscopy and ultrasound were done in the next week, and although the endoscopy was normal, the ultrasound scan showed gallstones and evidence of gallbladder inflammation. Jane went on to have her gallbladder removed with keyhole surgery a few weeks later which completely resolved her symptoms and let her get back on with her busy social life.