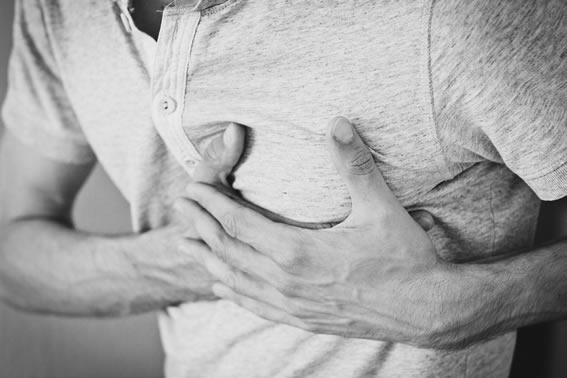 Acid reflux “heartburn” is a burning sensation usually felt in the lower chest behind the breastbone. Sometimes patients also get discomfort in the upper abdomen, food regurgitation, swallowing problems, acid coming up into the mouth, saliva in the mouth, or occasionally present with cough.

Heartburn pain is due to stomach acid and other stomach content damaging the lining of the gullet (oesophagus). This is due to the mechanism which usually stops acid from coming up into the gullet (lower oesophageal sphincter) not functioning correctly, sometime due to a hiatus hernia where the top part of the stomach slips into the chest.

Most cases of acid reflux can be managed with lifestyle advice and acid supressing medications such as omeprazole or ranitidine. Occasionally patients may need an operation (fundoplication) where the top of the stomach is wrapped around the lower gullet to try and recreate the valve mechanism that stops acid.

Patients who still have reflux symptoms after one month of acid supressing therapy are often referred by their family doctor for investigation. This is usually with a gastroscopy to look directly at the lining of the gullet and take samples if needed. Occasionally patients need additional testing with formal measurements of acid reflux and swallow pressure (pH and manometry studies).

Endoscopy, also called Gastroscopy, or oesophago-gastro-duodenoscopy “OGD” involves carefully passing a thin flexible video telescope from the mouth down the oesophagus (gullet, food pipe) and into the stomach and first part of the small bowel (duodenum). Careful examination of these areas can reveal a range of gastrointestinal problems including acid reflux, stomach inflammation or ulcers, coeliac disease, anaemia, or rarely cancers. Biopsy samples (small pinches of bowel lining, a painless process) can be taken and sent to the pathologist to help confirm diagnosis.

Patients often elect to have sedation (an injection of medication to feel calm and sleepy) for the test to be more comfortable. After sedation you cannot drive and need someone to accompany you home. Less commonly patients have the test with local anaesthetic throat spray to numb the back of the throat but are fully awake for the test.

Endoscopy is very safe, takes about 10 minutes and is carried out in the Endoscopy department, with risks and benefits discussed beforehand. Patients are usually ready to leave the department approximately an hour after their test and can return to normal eating the same day, and normal activities the following day.

Jane Brown (not her real name) was worried about her father, Brian, who was having increasing problems with heartburn and indigestion pain that were not getting settled with Gasvicon and Rennies. If fact it was waking him at night, and he was having to sleep sitting up which was making him irritable. His GP had given him a short course of acid supressing tablets which had not helped much, and when the tablets finished, the symptoms were even worse.

We had a consultation where we discussed Brian and Jane’s concerns, including about the risks of chronic acid damage and Barrett’s oesophagus and what the options might be to resolve this in the long term. We agreed to arrange an endoscopy to know clearly what was going on and to take samples if needed prior to making a long term plan.

Jane bought Brian for his endoscopy, which was carried out quickly and comfortably with sedation, and showed a hiatus hernia and some inflammation at the bottom of the oesophagus (gullet), but no Barrett’s oesophagus.

At our follow up consultation I explained to Jane and Brian that a hiatus hernia (portion of the stomach slipping up into the chest) makes the valve at the bottom of the gullet that usually blocks acid reflux work less well, and that a longer course of full strength acid suppression tablets would be needed to heal the gullet lining, but that Brian could “step down” to a lower dose to maintain healing long term. They were both relieved that there was nothing serious and that the symptoms could be controlled to enable Brian to sleep more comfortably lying down.